So it’s been a while.  If you’re following me on Facebook or Instagram you’ll know that the Teap family took a little trip last week to the happiest place on Earth.  What you won’t know is how close it came to not happening.

The last few months have been a hectic mess of hospital admissions, unpleasant medical procedures and more antibiotics than can be good for any one person.  I was feeling totally burnt out from it all and was really struggling with how to keep going.  So Steve and I decided we needed a trip away.  We initially planned on a city break but the more I thought about it, the more I thought I wanted to go somewhere fun.  Somewhere completely divorced from reality.  And so we decided to go to Disneyland Paris.

It took weeks from the time we first decided until we were actually able to book it because of me being in and out of hospital.  But eventually I was home, everything looked good and one Saturday we just went ahead and booked it.  For ten days later!  And then in the grand old tradition of Murphy’s Law or Sod’s Law or just plain old crappy luck, I got sick again.  Two days after booking.  So it was straight to A&E and another hospital admission for me.  It was obvious I had some sort of infection so the next step was to figure out exactly what it was.  I never realised this before but figuring out the right antibiotic for an infection is not a straightforward process.  They figured out that the bacteria was in the drain fluid coming from my liver.  So then they had to take samples and watch and see what lovely bugs grew.  Once they’d that done, they then had to attack those bugs with various antibiotics and see which one killed them.  It’s a slow process and very frustrating when you basically feel fine but you’re still stuck in a hospital bed.

We didn’t know whether to cancel the trip or not. Each day that passed that I was still in hospital it seemed less and less likely that we’d make it.  We hadn’t said anything to the boys about it so they wouldn’t have been disappointed but I really would have been!   Luckily for me, my Medical Oncologist is a wonderful man who is very supportive of his patients trying to lead a normal life and he was very keen to get me home so we could go away.  He even told me that patients often feel like their home lives don’t matter to doctors but that it’s as important to them as it is to us.  A happy patient is a patient who will do better in treatment – fact.

So amazingly, after only being admitted on Monday I was released on Thursday – one of my shortest hospital stays yet.  I had a staph infection but the antibiotic I needed comes in an oral form so I could go home with a stash of tablets and travel on Monday if I felt well enough.  I spent the weekend resting and humming and hawing.  My temperature kept bouncing around and it didn’t settle until Sunday night.  Even Monday morning when we got up we were still undecided whether or not we should go.  But then we said “Feck it”, packed our bags in about an hour (Steve had to do most of the work!) and left.  We told Oscar we were taking him on a little holiday and headed for the airport.  And we got there.  I had a private transfer booked from the airport so our arrival was completely hassle-free and we got to the Disneyland Hotel at about 4pm.  And it was magical.

I don’t know if it was adrenaline, dumb luck or Disney magic (I’m going with the pixie dust personally) but once we were actually there I started to feel so much better.  We had the most amazing four days.  Once Oscar figured out where he was he was gobsmacked and Noah pretty much spent the whole time with his eyes popping out saying “Wow”.  We rented a wheelchair for me and because I can’t stand or walk for long periods at the moment, we got a priority pass that allowed us to skip most queues.  I would not have managed the trip without them – they made it so much easier.  We saw every bit of the park, went on 90% of the rides and saw the most amazing live show that had the boys mesmerised.  We met Mickey Mouse twice and had breakfast with a whole bunch of Disney characters.  Oscar’s favourite story from the trip is that Mickey poked him in the shoulder.  He’s telling everyone!  We also did some shopping – well, you’d have to, wouldn’t you? 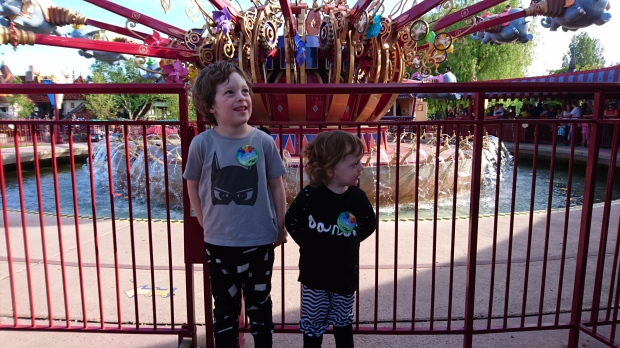 On Thursday afternoon we headed back to the airport and home.  I don’t know who was sadder – the grown-ups or the kids.  And on Friday I started my new chemo.  Back to reality with a bang. 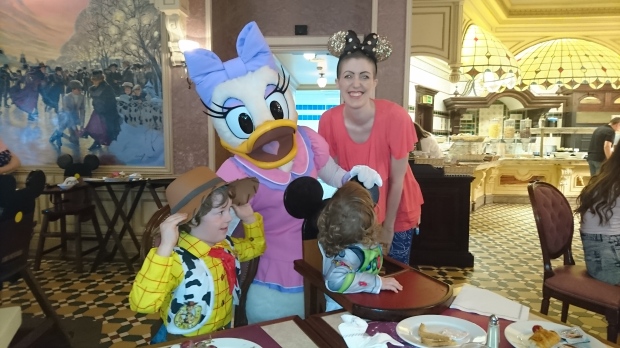 The trip to Disneyland gave me so much more than just a few days away.  It was a complete break from real life – everything was colourful, everyone was smiling and happy and the world just seemed like a better place there.  It gave me a mental recharge that’l hopefully get me through the next few months of chemo.  And more than that, it gave me memories.  I can’t count the number of times my eyes filled up with tears just watching the boys beaming and laughing and having fun.  Their smiling faces are the very best medicine.  It was a magic trip from start to finish.  And it just goes to show that sometimes, when you wish upon a star, your dreams really do come true.

6 thoughts on “When you wish upon a star…”